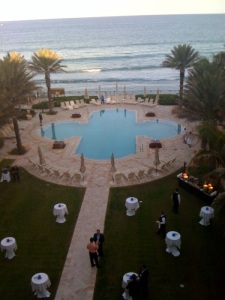 I’m back from Palm Beach and the lifeguard stand yesterday morning was flying a flag that apparently indicates “dangerous marine wildlife”. Obviously my first thoughts (it was near perfect surfing conditions, off-shore breeze and a nice curl) were of large great white sharks cruising just behind the break. But then I started thinking about how the Marine Park’s here in Florida have had their own dangerous marine wildlife conditions–seems to me that an Orca confined within a tank is a recipe for disaster.

But then walking along the beach, and noticing the very dangerous remnants of a Portuguese Man’O War jellyfish, I was satisfied that I’d found the real danger in an invertebrate with a serious attitude (as far as stinging is concerned).

But then I learned later, in fact I’d been right originally–it was the sharks.

I may be the editor of The Biological Bulletin, but I’ve got a lot to learn about marine biology!

Reading Charles Sibert’s wonderful article in yesterday’s Sunday NYT Magazine, I was reminded by my own encounter with an Orca on the north shore of San Juan Island close to twenty years ago. I had been told that if I showed up at the rocky outcropping around 10 in the morning, I’d run into a pod of the huge creatures face to face.

This was no exaggeration. Pretty much exactly on time, I was face-to-face with a huge intelligent eye gazing across the species barrier. It’s a moment I’ve never forgotten. Read the entire article. The end is the most moving.
So how smart are whales? I think that’s a very interesting question. Certainly the fact that they possess the spindle neurons that humans and the great apes also have makes the question neurobiologically relevant.
Jim

This work is licensed under a Creative Commons Attribution-NoDerivatives 4.0 International License.